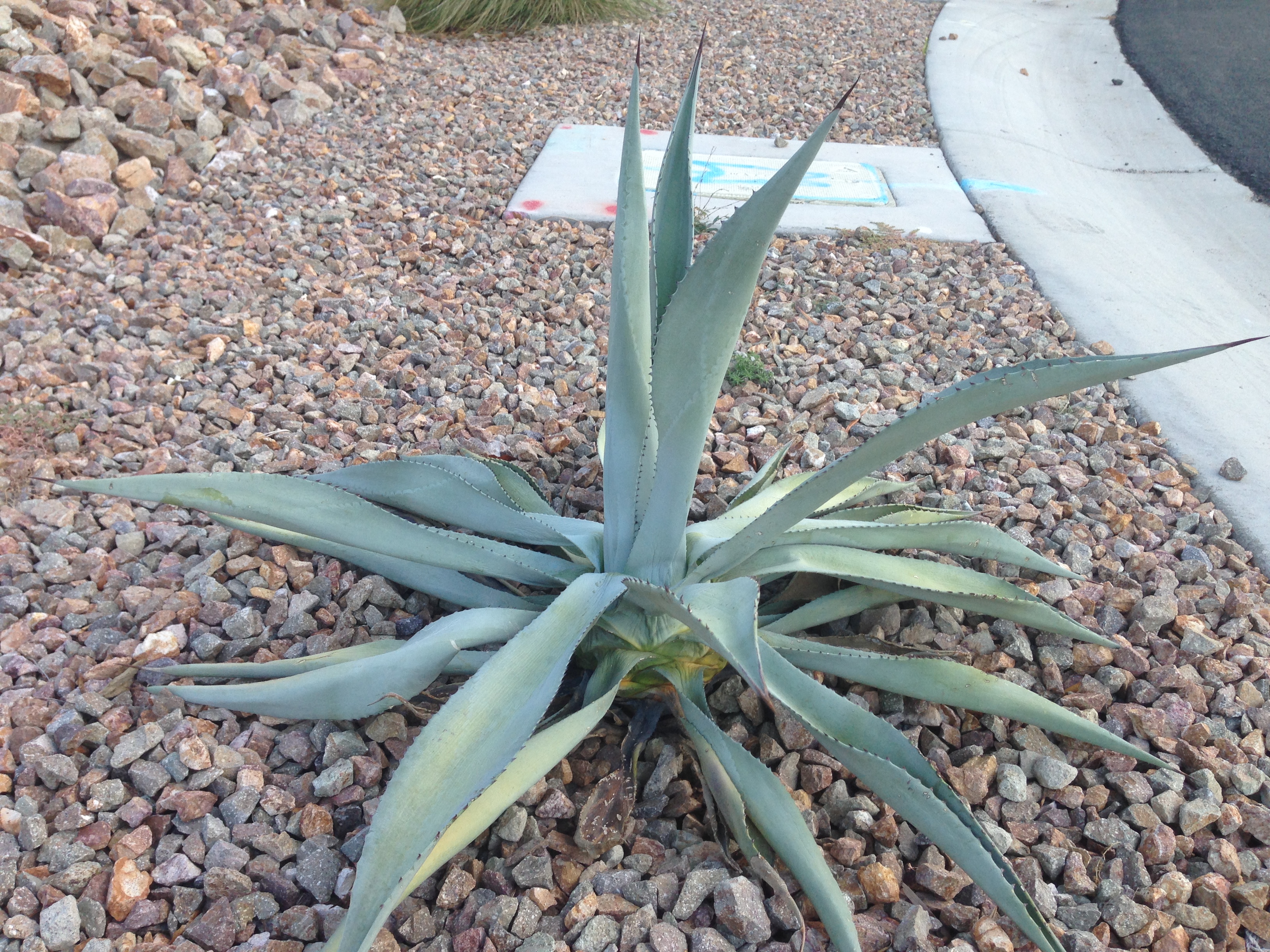 One of my agave plants wilted and died from a Weevil (a type of beetle from the Curculionoidea superfamily) infestation.  Below is my story of how I discovered that Weevils had caused my Agave to droop, yellow, decay at the base, and subsequently die.  I also explain how I protect and prevent my other Agave plants from becoming infested by this grotesque snout beetle bug and it's larva.

It first happened to one of our Agave's about a year ago.  We have seven agave plants in our front yard and one of them started wilting a bit.  At first, I thought it was just opening up, maybe to get more sun... I had no idea.  I didn't know anything about Agave plants as I hadn't done any research yet.

We purchased our house new from a Las Vegas home builder and the front landscaping was contracted by them (with some issues I'm discovering and will outline in another article).

A few weeks after first noticing the agave looking wilted, I realized something was definitely wrong as most of the outer leaves had subsequently fallen flat.

I started doing some research online and found some people reporting their Agave's were dying from being over watered.  Then I found more posts saying these succulents are pretty hearty and can take as much water as you throw at them.

I finally decided to inspect the plant closer.  I had looked at it from a few feet's distance, but hadn't really gotten up close.

I started by inspecting the water heads.  They were right next to the base of the plant.  When I went to lift one of the leaves to inspect the water head, the whole crown lifted and the center stalk fell over.  What I saw next almost made me sick to my stomach.

The whole inside of the plant was rotten and there were giant maggot looking creatures crawling around inside it, along with what I thought were possibly dung beetles.   There were only a couple giant maggots and beetles, so I figured these guys were just hotel guests staying for the cuisine and not what actually killed the plant.

I headed back to my computer and again continued searching for things like "drooping agave", "wilted agave", and "dying agave" as I didn't think the bugs had anything to do with it.

I didn't find anything that looked like what had happened to my plant.  Finally it hit me that maybe I should include the bug in the search.

One result that showed up was an article from Arizona University and when I opened that article, one of the first pictures looked like my issue.   I scrolled down to find the information about the Weevil:

Agave Snout Weevil (Scyphophorus acupunctatus). The adult weevil attacks many species of agave. The very large Agave americana or century plant is more susceptible to weevil damage than the smaller species. The adult weevil is about ½ inch (12 mm) in length, is brownishblack and has a dull body (Fig. 16). The adult female enters the base of the plant to lay eggs. Decay microbes also enter through this injury and as the tissue rots, the plant has a wilted appearance. Infested plants soon collapse and die (Fig. 17). The larvae (grubs) develop in the dying plant and infect other hosts nearby. Agave snout weevil also infests the canes of several Yucca species. Control of the agave snout weevil is difficult. Selecting species that are less susceptible and typically smaller than the century plant is helpful, especially in areas where the problem has occurred previously. With rare or special specimens, chemical prevention using a broad-spectrum insecticide applied in spring is often effective in reducing damage.

To my horror and dismay, the article basically said there was virtually nothing I could do to stop these nasty creatures of decay from killing my other agave plants!

Panicked, I made my way to the local Star Nursery to see if someone at the information desk could help me.

As soon as I started describing my wilted agave, the woman told me I had Weevils.  She said it's a common problem out here in the West (Nevada, Arizona, New Mexico, Utah).

But unfortunately she didn't have any good answers as to how to stop them from killing my other agave plants.  She suggest a spray on bug killer, but said it probably wouldn't work.

I was blown away that there was nothing that could be done about these wickedly grotesque creatures!

After pouting for a few days, I sent a text to my the bug guy that sprays for bugs around and in my house to see if he knew anything.

He didn't know anything at the time but said he'd investigate.

He ended up calling his supplier and finding out there is a "systemic pesticide" Criterion 75 WSP Systemic Insecticide that can be used to kill any existing Weevils and prevent other plants from getting infested by them.  Apparently, according to the supplier, agave farms use it to keep their fields from getting infested.

Amazingly, he came out the next day and applied the Criterion 75 WSP Insecticide.  He had to put a packet in a 5 gallon bucket of water and dump the whole thing on each agave (By the way, I have the best pest control service in Las Vegas; contact me if you want the company name.)

It's been a year since he started applying the systemic pesticide and no more of my agave's have been infested.  He applied the pesticide last fall and this spring.  In contrast, my next door neighbor, who only live in their house part of the year, have the same amount of Agave plants and three of them are currently infested and dying.

Thus, so far, it seems like the systemic pesticide is saving my agave plants.

My bug guy came back with this pesticide Merit 0.5 Granular Systemic Insect Control - 30 Pound Bag, which has the same active ingredient (Imidacloprid) but is less expensive per application:

(View is from the bottom. Hand is holding the plant's middle stem)

(Notice the yellowing.  I think that may be a key sign.)

Agave That Recovered After Weevil Infestation (Weevils were killed with pesticide)

Interestingly, this Agave near my house was infested last year.  My bug guy put some type of pesticide granules on it that killed all the bugs (via contact I believe).  Unfortunately I don't seem to have a picture of it when it was rotted out, but it was the same as the others I'm showing. To my amazement when I just check on it, it has grown back big and strong!

Agave That Had Been Run Over By A Car

This agave was run over by a car a year or two ago.  It was completely smashed (again, I wish I had a picture of when it was smashed).  It has since grown back.  I guess these plants are very resilient!

What happened to the 10 year chart in the iPhone Stocks app on IOS 12? Your Answer is Here