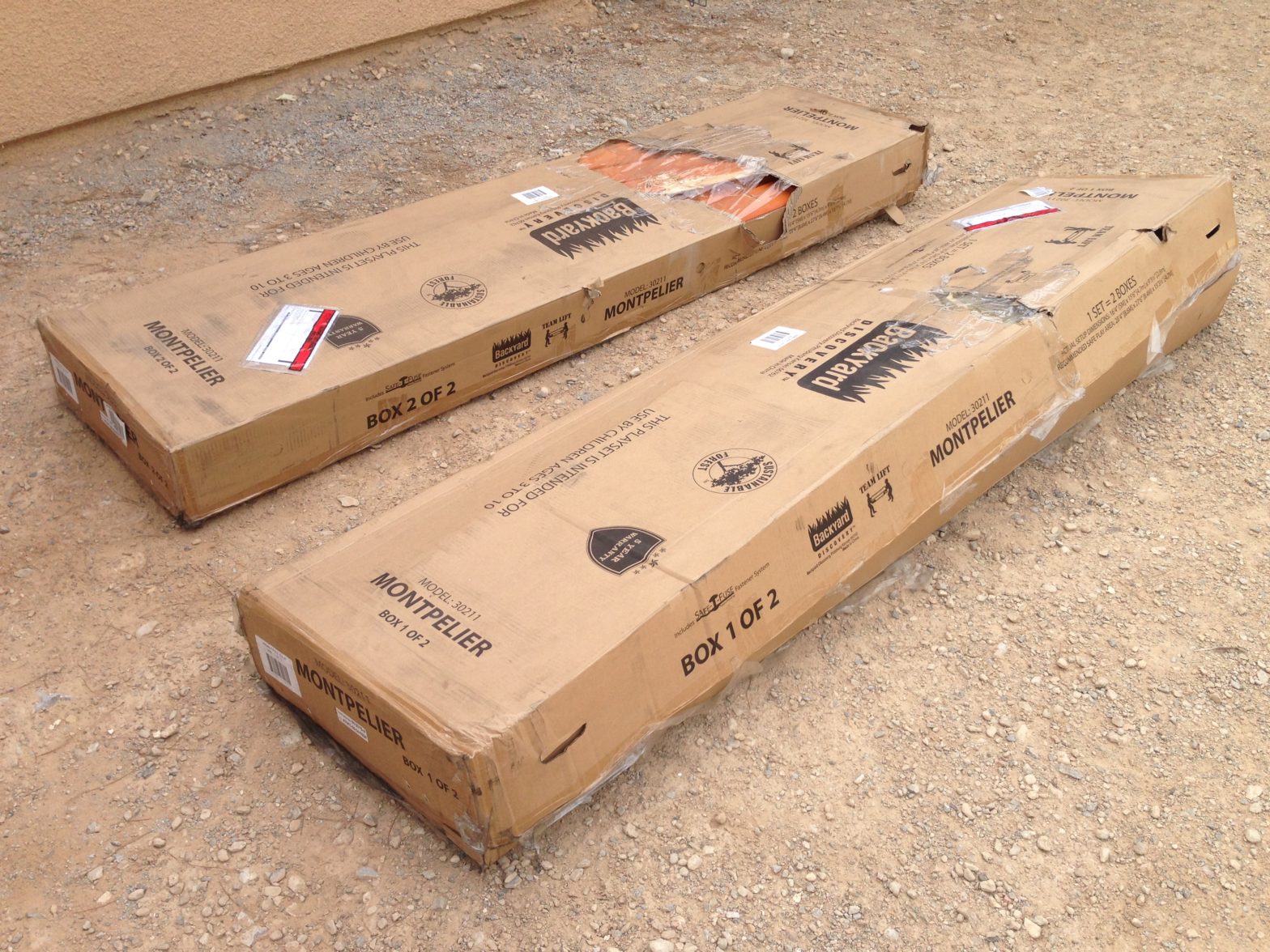 This article is part of a series of articles on my experience purchasing and building a swingset from Walmart.com. 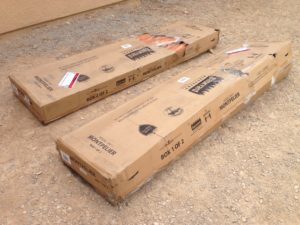 I purchased my Backyard Discovery swing set from Walmart.com, but the particular model and manufacturer I ended up with wasn’t my first choice.  Though they all look very similar, as though they are all built by the same manufacturer, when searching for swing sets in the “Outdoor Play” section of Walmart.com, be aware that there are multiple manufacturers.  So if you read a review on the quality and difficulty of assembly of one swing set, don’t assume that other, similar looking swing sets will have similar quality and a similar assembly experience, because they may be made by different manufacturers and hence have totally different qualities and assembly experiences.

I originally purchased the “Cedar Summit Sandy Cove Wooden Swing Set” by the manufacturer “Big Backyard” (on Walmart.com) after reading good reviews on its quality and ease of assembly in the reviews section.  I purchased the unit for $549.00, with an additional $147 shipping charge, for a total of $696.

The swing set was to be a gift for our 2.5 year old son for his adoption day. Thinking I was planning ahead, I ordered the play set 16 days prior to the big day.

My thoughts were that it would take a week to arrive, and about a week to put together.

Boy did I turn out to be WAAAAY OFF on my timing!  I had no idea of the issues I would have getting the product delivered and had significantly underestimated the amount of time it would subsequently take to assemble.

The first issues I didn’t account for were the multiple shipping problems that would come to pass.  Apparently - and this could just be my experience - these things do not ship well, readily getting damaged in transit.

My first delay was when the delivery company scheduled delivery 10 days after my initial online order and didn’t show up on the day of delivery.

The delivery was to come on on a Friday and when the delivery time window had expired on that day and no one had shown up yet, I called the delivery company trying to confirm the delivery.  I was put through to my delivery representative’s voicemail multiple times and she didn’t respond.

She informed me that the delivery guys said the boxes were so damaged that they decided not to deliver it, but instead mark it to be returned to the manufacturer.  I let her know I was pretty upset that I “took the morning  off” to be home for the delivery and no one had the courtesy to call me and let me know they weren’t coming (In reality, I work from home, so it wasn’t that big of an issue, but I wasn’t going to give that up).  She agreed it was poor communication on their part and apologized.

Our discussion ended with her stating they would return the swing set and Walmart would subsequently ship out another one.

Four days later, when I hadn’t heard anything, I called Walmart.com customer service to find they hadn’t received the damaged boxes back yet. But the rep did some checking and confirmed that the damaged unit was on its way back.

I let the representative know that not only did I waste taking half a day off, but that this was an adoption day gift for my son and it now wouldn’t be on time for the big day.

For my troubles, the representative gave me a 20% discount and re-orderd another set to be delivered.

Unfortunately, the representative was not very good at math and the 20% was really only 10% and it took me forever to prove to her that she was wrong; the entire time she was extremely condescending to me.

A few more days passed and I received an email confirming my 20% credit on the order, but I hadn’t received anything about the shipping.

I call back to the Walmart.com customer service and am informed that the swing set is on backorder and there was no indication when it would be back in stock for delivery.

Ugh! Are you kidding me!  How did that rep no know it was on backorder when she issued the re-order!

So I asked the current representative if I could purchase a different play set and still get the 20% discount.  He said sure and noted my account so I could take some time to go look for another play set.

I did did some quick perusing and chose the Montpelier Cedar Swing Set by the manufacturer Backyard Discovery.  It was a bit more expensive ($659.97 vs $549), but for some reason had a lower shipping cost ($98 vs $147).  With the 20% discount on the extra product cost and the lower shipping, the net I would pay was pretty close.

So I called back and had the other order canceled.  This 3rd representative had me order the new set online and then adjusted the price from my order number.

It was a frustrating mess.

I restated my frustration and situation and for my troubles I was given an additional 50% off of shipping and though I escalated as far up the chain as I could, I was told that the 50% off shipping, along with my 20% discount, was the max they could offer for my troubles.  So I accepted.

Finally, 28 days after my initial order and 12 days after the big day, the wooden swing set arrived.

And of course it was damaged!!!

Before the guy took the boxes off the truck, I quickly called the Backyard Discovery customer service and was able to get a hold of someone that said to accept the delivery, do a parts inventory, call back with the IDs for the damaged and any missing parts, and they would ship them out to me for free.

After feeling better that I could easily get a hold of someone at the manufacturer and get replacement parts, I accepted the delivery. 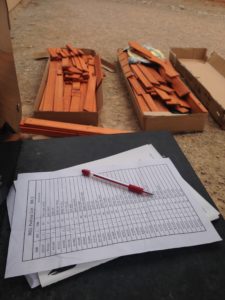 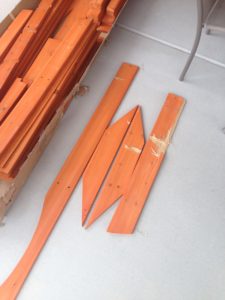 All the parts were present and only 4 boards were damaged.  I looked them up in the instructions and they were all cosmetic parts (as opposed to structural) and since I didn’t do an inventory on the hardware (screws, nuts, bolts, etc),  I decided to wait until after I put the thing together before ordering a comprehensive list of replacement parts.

My thinking was that I’d have one chance to order replacement parts, but it turned out after I did end up later calling for the parts, their customer service is very easy to work with and the representative said I could have ordered the initial damaged parts to be replaced and if any more parts later turned out to be missing, I could have called again to have the others shipped out as well.  It wasn’t a one-shot deal. So accolades to the Backyard Discovery company for its fantastic and flexible customer service.

In conclusion, my ordering experience was a rough one.  I spent a lot of time on the phone correcting issues, but for me it was acceptable as my 20% discount and 50% off shipping saved me about $180.

If you think about it terms of “time is money”, I probably spent about 4 hours in total on the phone correcting the issues.  Doing the math ($180/4), that’s like I got paid $45/hour - cash - for my time, which is pretty good pay.

Thus, rather than getting so angry with all the compounding issues to the point where I could have given up and ordered from somewhere else (which would have been more expensive and without a discount), I consider it like Walmart gave me a little part time job and paid me to solve their problem.

My next step was to start assembling the swing set.

This article is part of a series of articles on my experience purchasing and building a swingset from Walmart.com.

NOTE: This article is not fully complete.  Additional edits, clarifications, pictures, etc still need to be added as I'm able to find time.