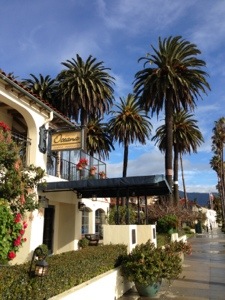 My wife and I spent the weekend in Santa Barbara visiting friends who live there.  Our friends suggested a few hotels their parents like to stay at when they are in town, but we decided to Priceline a hotel the day before instead.

I was hoping to get a real nice 4 or 5 star room for a cheap last minute price, as I often hear people bragging about their "awesome" last minute deal they found on Priceline, when they explain to me the "right way" to do Priceline is by booking the very last minute.

Apparently there aren't many 5 or 4 star hotels in Santa Barbara, and we ended up with a room at the 3 star Hotel Oceana Santa Barbara for $153 ($182 with taxes, fees, etc) for one night.

Priceline didn't accept our original offer but told us for the exact price above, we could book the Hotel Oceana.  One of the places we were looking at, the Franciscan, was $150 and my wife thought this place looked better.  So she booked it.

When we got to Santa Barbara some other friends told us they had been wanting to stay at the Oceana but they never could find a room for less then $300.  So we felt pretty good about ourselves.  However, our friends must have only looked during the busy season, as I just looked up the price of the hotel for this upcoming Saturday, as a comparison, and it looks like we really only saved $15 off of the hotels direct price.

The hotel is right across the street from the beach.  When we got there, we were surprised with an upgrade to a room with a partial ocean view (making the deal a little better as the "partial ocean view" looks like it would have been about $200 for the night).

We paid $15 for parking, but later that night we couldn't get a spot and had to park on the street, so they gave us the $15 back.  Incidentally the street was empty and the spot was closer to our room than any of the on-site parking lots.

The hotel room was pretty small.  The decor was tried to be trendy.  My wife noticed, and we found it funny, that the designs on the walls were just stickers (I didn't take pictures of them, but wish I had). 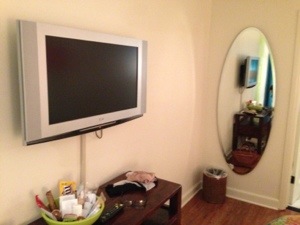 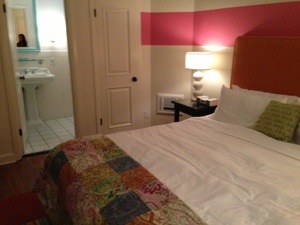 Our room had a king size bed.  When paying more than $100/night, I'm very picky about the comfort of hotel beds.  I thought the king bed was very comfortable.  And the sheets were fairly high thread count so they were soft and comfortable.

The shower had plenty of hot water, but was actually too powerful in its single mode of mist that actually bordered on painful.  The water had an odd smell for me, but likely its just filtered ocean water?! 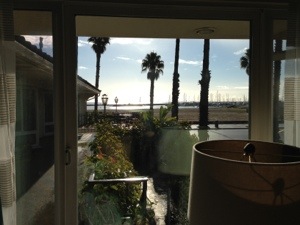 The "partial ocean" view was decent, but it was a gloomy morning when we woke up, so it wasn't that big of a deal for me.

The hotel is fairly thin walled, and you can hear people walking around outside and in the neighboring rooms in the morning.

The room had the typical over priced candy with drinks in the fridge.  There was a Kureg coffee maker in the room but the coffee was not free.

Obviously at this hotel, you are paying to be right next to the beach.  Since we  were out with our friends and didn't spend any time at the beach or enjoying the view, I felt $182 was too expensive.