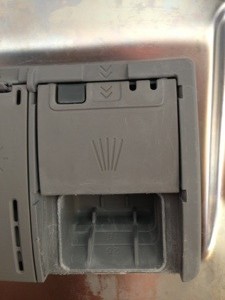 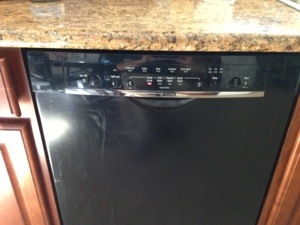 About every six months the door of the dishwasher detergent dispenser that is supposed to open during the wash cycle starts sticking shut.  Our dishwasher is a Bosch model SHE4AP06UC/06, but I assume this happens on most machines.

What I think happens is that dried up detergent sticks to the plastic around the opening of the dispenser. The spring that opens the door isn't that strong, so as the buildup gets thicker it causes friction between the moving parts and the door ends up sticking closed during the wash cycle, not releasing the detergent into the machine.

It could be that our water is really hard and is causing the white buildup, but if that were the case, from the amount of buildup, I'd think the Jet Dry clear rinse dispenser would be covered in the buildup, and the spouts that shoot the water during the wash cycle would be clogged as well.

The first time we noticed the detergent door not opening, and hence discovering the buildup, we were using the cheapest liquid detergent we could find at Wal-Mart.

After cleaning the parts that I'll talk about below, we upgraded to the more expensive Cascade brand, figuring the cheap detergent was causing the residue issue.

But alas, even with the more expensive (and therefore psychologically higher quality) Cascade, the buildup keeps doing its thing... building up over time.

So, about every 6 months or so I have to clean the dispenser when we notice the dishes aren't getting cleaned and subsequently re-inspect the dispenser door.

The first time I attempted to clean the sticking buildup-covered parts, I thought I needed to remove the entire dispenser unit.  So I took all the screws out of the main door, took the front panel off, and figured out how to release the entire unit.

After doing all that work, I realized that I was no closer to getting at the caked on buildup than when the dispenser unit was still installed in its place in the dishwasher door.  And unfortunately, though I consider myself a pretty mechanically intelligent guy, I now have 2 screws and a plastic spacer in the garage, because after putting the whole thing back together, I was too lazy to pull everything apart and figure out where the extra parts went back.

So do yourself a favor and try doing the easy fix first, before pulling the whole thing apart.

Really, all I needed to do, to clean the caked on white deposit was gently release the moving door from its tracks with a butter knife and scrape around the released door and the edges of the un-removed detergent reservoir. 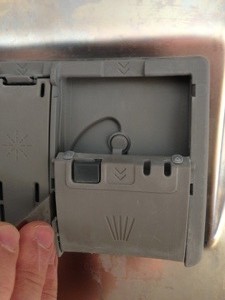 Once released, I scraped the white buildup on the door and the reservoir. 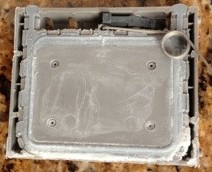 The only tricky part when releasing the door is to pay attention to the spring that loads the door so that it opens when the inner automatic latch (or the manual latch you press to open detergent the door) is released. 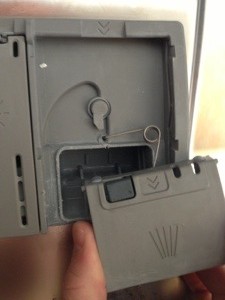 The spring may come off, and you might have a tough time reconfiguring it so that the door springs open after you reinstall the door.

When reinstalling the door, you'll want to make sure the spring ends up in the groove that is cut out for the movement of the spring as the door opens. 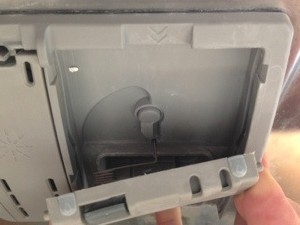