Back when I was a kid, I used to watch a lot of late night comedy shows on broadcast tv (we didn't have cable)... well I'd actually record them and watch them the next day as I wasn't allowed to stay up late enough to watch them when they aired.

I even dubbed my favorite comedians sets onto a "best-of" tape.  The tape got to be so long, that I even went so far as to create an index for it with the names of the comedians and a star rating of 1-5 based on their performance. 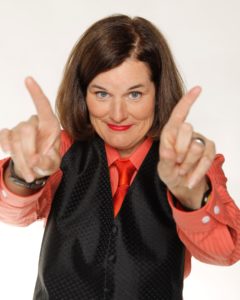 I don't recall the names of all the late night stand-up comedy shows - I think there were as many as 3 different shows I'd record - but I do recall one was called "Caroline's Comedy Hour".

Paula Poundstone was one of the comics that often appeared on these late night stand-up tv shows at the time. As it was tv, each comedian would only do 2-5 minutes of their act, so I've never seen Paula's full act but knew I used to consistently give her 4-5 stars. And I recall that she always had great topics and ideas with a very uniquely funny way of thinking about and describing them.

So when I recently went to find a ticketing link for my brother's performance (I run my brother Frank Caliendo's website and tour schedule) at the Orleans Casino here in Vegas  I  saw Paula Poundstone was performing.  With my wife stressed out from working long days, I decided to take my wife to the show to see Paula perform live as I figured from my childhood reviews of her act, coupled with recently enjoying her improv banter and wit when I randomly tune into NPR's "Wait, Wait... Don't Tell Me!",  her show would have a good chance of being worth the time and expense because not only do we have to buy tickets, but we have to pay for a baby sitter - so time out of the house is expensive and needs to be worth while!

I was able to get my wife's buy-in on attending the show as she has heard Paula on "Wait, Wait... Don't Tell Me!" and found her to be funny.

I'll explain this further in another blog post... but I've been working around comedy for enough years now and seen enough of the behind the scenes, that I've become a bit jaded and don't laugh much when I watch stand-up comedy.

In fact with the time I've spent watching comedians on tv and seeing so many comedians perform live, I've seen enough comedy that I no longer laugh at most comedians stand-up as I can either directly point to a comedian that did a similar joke 10 years ago or their comedy feels like its similar to something I've already heard.

I went into seeing Paula Poundstone with the thought that I would be seeing a seasoned veteran whom I'd enjoy watching, and even if I did find her comedy to be "something I've already heard" its probably because she was one of the first ones to do it.

Not being as jaded from working in proximity to the comedy business, based on my childhood opinions, I figured my wife would have a great time and find Paula's stand-up to be quite funny regardless.

I have to say, Paula's live show exceeded my expectations.  My wife's expectations were exceeded as well and I often caught myself turning and looking at her as we were both heartily laughing during the show.

I was surprised to find that though she peppered in some traditional stand-up bits, a majority of Paula's set was spent doing "crowd work", where she interacted with the crowd, asking questions and putting (willing) people on the spot.

Though I have seen a ton of both live and televised stand-up, I've never really been able to catch any of the great "crowd work" comedians perform.

So my inexperience may be affecting my opinion, but Paula's crowd work was incredibly strong.  Her ability to ask questions in a way that provoked ridiculous responses from the crowd was incredibly fun to watch.

I liken it to watching a musician that plays so well that you actually think you could pick up the guitar and be just as amazing.

Paula would ask questions of those that spoke up in the crowd and steer their responses into a direction that was thoroughly entertaining for the rest of us to hear.  I found myself sitting in the crowd hearing people's responses and trying to beat Paula to the punch.  I actually felt as though I could be the one on stage being as funny as Paula, but in reality I know that I'm not the skilled one, as its her talent setting people up that makes it easy to write the punchline.

Thus, my wife had a wonderful time and so did I. I rarely laugh at comedy anymore, but Paula had me smiling, laughing, and even pulled more than a couple hard belly laughs from me.

Its interesting that I'm excited to go see her perform again in the future as I want to see if she just had an exceptionally "on" night or if she can work a crowd that well consistently.  Being a seasoned veteran, I'm sure if she does have off nights with the crowd, she has plenty of well written traditional stand-up to fall back on.

With all that in mind I would highly recommend seeing Paula Poundstone perform live if you have the chance.  And if you do, please leave your comments below about your experience.