It took me two days to solve an electrical problem my wife could have solved by breakfast! 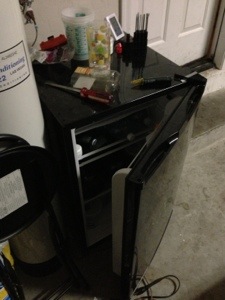 My wife is out of town for a few days and though I might be over-exaggerating because I miss her, everything seems to be falling apart.

The most recent blow cam when I went to get something out of the fridge in the garage.

I opened the fridge to find that it wasn't very cold inside, and realized it wasn't working. It dawned on me that I hadn't heard the rumbling of the compressor in a while, but never processed that thought any further as I figured it was because it has been cold outside, so the fridge wouldn't need to kick on very often.

I unplugged the fridge and tried plugging a nearby lamp into the outlet to determine if the Fridge had died or if the outlet itself was out. The lamp didn't work, so it appeared that the outlet was out. 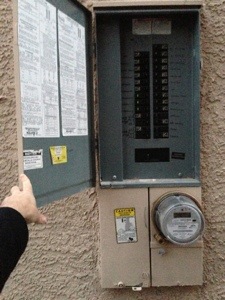 I decided the fridge had blown the circuit and went to check the fuse box.

Everything in the box seemed to be fine. All breakers were in the "ON" position and nothing looked blown.

I went back to the outlet to inspect for black marks to see if maybe the cheap Fridge had blown hard enough to cause damage to the outlet, but didn't find anything.

I thought it was strange that only two of the outlets in the garage were out and everything else was fine.

So I decided to get out my Volt meter and try to get some value out of my $20k college Electrical Engineering degree.

I went out to the fuse box, pulled the face off to get at the wiring, and tested all the fuses. I found 120 Volts on on the load side of each of them, proving they were all working fine. 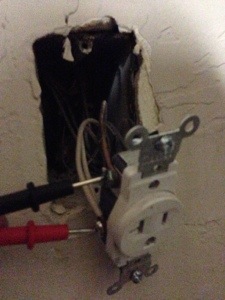 Since the fuse box was all good and the outlet was dead, it had to be that the problem was with the connection in between. Something must be wrong with the wiring.

But how do I test it? I needed to check continuity, of the wires, but I couldn't readily think of an easy way to accomplish it.  And what if something was wrong with the wires in the walls, I'd have to tear apart a ton of drywall just to search for the position of the problem.  Getting overwhelmed, I decided to walk away and contemplate it for a while.

In the mean time I called and left a message asking my buddy Benny B in Wisconsin, who was electrician at one point in his life, to call me.

That night I slept on it and decided that I would do some continuity testing the next day.

Benny called me back the next afternoon and I described to him my perplexing situation. He suggested that I look on the outside of the house, on the same or nearby wall for an outlet with a GFI. He explained that in Wisconsin its code to have outlets on the outer walls of a house and they are usually protected by a GFI.

Benny gave me what I needed; a new direction to explore. 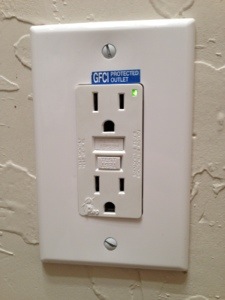 If you don't know what a GFI (Ground Fault Interruptor) is, its an additional circuit protection device. I believe they are mostly used in bathrooms where there's the potential for someone to stand in water and be connected to "Ground", allowing the current fr0m an outlet to short circuit through the person's body. The wet person causes a "Ground Fault" because the current isn't going where it supposed to go, and the GFI safety mechanism doesn't allow that to happen. It "trips" like a fuse and you have to reset it to get it working again.

To make it even safer, the wiring is supposed to be such that all the other outlets and lights down stream are tripped by the same GFI. In my bathroom, if you trip the GFI, not only do all the outlets get disconnected, but the lights and exhaust fan are taken out as well, making sure there is no power anywhere in the area, increasing the safety. 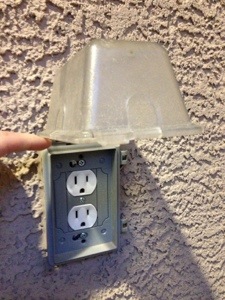 So I took a look on the outside of the house near the dead outlets and found there WAS an outlet out there. But it didn't have a GFI.  Problem not solved.

I brought the lamp with and tested the outlet to find that it too was dead.

Then I searched the rest of the ground perimeter of the house to find there were two other outlets on the exterior and they were all dead. And none of them had a GFI. So what killed the power to all these circuits?

Then I remembered we just cleaned the lights off the upstairs balcony and figured that had to be the outlet with the GFI that knocked out the power to all the other exterior outlets. It is the outlet closest to the the fuse box, so it would make sense that IT was the outlet that controlled and killed power to all the rest down stream.

So I raced upstairs to the balcony to reveal my brilliant deductive reasoning!

When I got to the outlet, I popped open the protective cover to find it was just a normal outlet like all the other exterior ones. No GFI.  Problem not solved.

What could I be missing? And who wires a house to have so many different locations of the house on one circuit?! It made no sense. 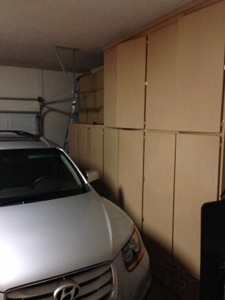 My only other thought was that there must be a hidden outlet in the garage somewhere. All the interior walls of our garage are covered with shelving, and they are all packed solid. I would have to tear everything out of all of them, just to try and find the hidden outlet. It would be a MONUMENTAL task!

So in a last ditch effort to avoid that catastrophic amount of work, I decided to just start taking my lamp to all the empty outlets in the house to see if there were any other outlets that weren't working. 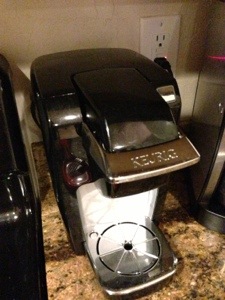 I got about three outlets in, when I saw the new Kurig coffee maker that my wife received as a Christmas present from her parents, was plugged into a GFI outlet. And low and behold, the GFI was tripped!

I hit the reset button and headed to the garage to find the fridge humming again.

It thought it was ABSOLUTELY insane that a circuit in the kitchen is connected to the entire perimeter of the house and two of the three outlets in the garage! And I got confirmation from Benny B that I was right.  He labeled it "a job done by a lazy and cheap electrician that didn't want to take the time and expense to run the extra $40 in wires". 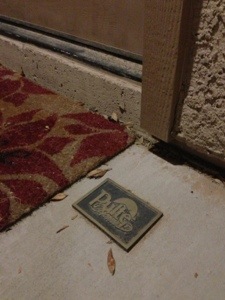 Our house is a Pulte home, and Pulte has the reputation of being one of the best home builders in the area. But with this incident, and a few others (that I'll write about some other time), I'm finding that they aren't all that amazing.

My only solace is that at least I persisted long enough to find the solution on my own, and I didn't have to call and pay a hundred bucks for an electrician to come out and push a button for me.

Moral of the story... when an outlet goes out and there's nothing wrong at the fuse box, check all the GFI's in the house, even if they don't seem like they could be on the same circuit because they are so far away.

Finally I don't drink coffee anymore, so the funny part of the whole story is that if my wife were home, she would have known by breakfast, when she went to make her morning coffee, that the kitchen outlet was out. We could have solved this entire thing that morining. Maybe I need to start drinking coffee again.

And the next time something goes wrong in the house, maybe I'll just have to make myself a cup of coffee and see if the solution presents itself!   ... Yep, that's a better moral to the story.  Drink coffee.