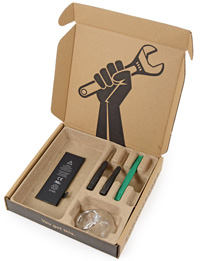 I recently replaced the battery on my iPhone 5 as my phone would quickly lose power during the day.  When I first got my phone, I could go pretty much a whole day without needing to charge.  And that included taking lots of pictures and video as well as spending time texting and using social media.

Then, about a few months back, I started noticing that I'd have to charge mid day to make it through the rest of the day.

Then not long after, my phone started not dying after only a couple hours of heavy usage.

I hit the point where I absolutely needed to replace the battery when my phone started showing that I had 20% left and would suddenly die about 5 minute later. That's how you know your battery is past its life cycle... as it starts to "lie" to the processor (comment below and I'll elaborate further on what I mean by this).

Since I'm a big picture/video taker, if we went somewhere new with our (currently) foster baby, I'd have to worry about my phone dying and not getting to take pictures/video at the end of the outing.

So I searched around on the web to find the best deal on a battery.

You can get a battery for as low as $5 on sites like eBay, but after looking closely and reading reviews, I realized these are pretty much always used batteries.  I don't want a used battery, as it will likely have the same issues.

So I took the plunge and spent the money to make sure I got a new battery by purchasing one from iFixIt.com.  You can buy the battery by itself for just $25 or in a kit for $30 which includes the tools needed to open up the phone.  The shipping was about $5.

I bought the kit (as opposed to just the battery) as I knew I didn't have screwdrivers small enough for the tiny screws inside the phone. It was worth the extra $5 for me.

Before purchasing I even searched for and easily found a $10 off coupon.  Just google "ifixit coupon" and stuff will come up.  You should be able to readily find at least a $5 coupon, basically making your shipping free.  The coupon code I found, "INCOMPARABLE", doesn't seem to work on orders less than $50 anymore and quickly searching, I don't currently see any $10 coupons.

The kit is great and comes with everything you need to replace the battery.  Make sure to watch their iPhone 5 battery replacement tutorial.

I do want to point out a couple lessons learned or "gotchas" that screwed me up for a bit.

First, when putting the phone back together make sure to snap the top in first (putting it back the same way - but in reverse - that you took out).

Second, if you are like me and decide to test your phone before closing it back up, know that the circular "home" button does not work until you close the phone back up.  Thus, once you power up, you can't shut down or do much navigating until the phone is closed back up.  I bet you could connect the back of the home button to the base with a wire, to complete the circuit, but I didn't try to do that.

Finally, though I was working on my big white desktop, I did manage to drop one of the tiny screws down into the abyss of my plush carpeting.  The kit should come with a couple extra of those tiny screws, because you will drop one.  It dropped because the screwdriver, though magnetized, is not strongly magnetized and the screw fell off, hit my desk at a funny angle and flew into the carpet. It was a very dramatic, slow-motion event in my head as I think back about it.

Seriously... these screws are so tiny that it was buried in an instant.  I looked, but to no avail. Since I didn't have a powerful magnet around, I just let it go.  There is a shield inside that has 3 screws on it, I chose one of those to be left empty of the missing screw as two should be enough to get it to make solid contact (if my phone starts doing screwy things, I'll know to get another screw on that shield).

The replacement was pretty easy.  I didn't time it, but it took maybe 30 minutes tops.  I'm a do-it-yourself type guy, so your mileage may vary.

I'm happy with the new battery.  It seems to be an exact OEM replacement.  I didn't look very close, but recalling the two, they did seem to look exactly the same with all the same markings in the exact same places.

The replacement battery is strong and lasts all day.  Strangely, the first 10% goes quickly, but the middle percentages last long and when it gets down to 20%, I still have an hour or two before my phone dies.