How to repair a large sinking bathroom double-sink vanity mirror

Our large 8-foot bathroom vanity mirror over our double sinks started sinking on one side a few years ago.  Apparently, the installers didn't screw the bottom metal mounting bracket into the wall.  They simply sat the mirror into the metal guard and rested it on the back of the sink counter top and glued it to the wall with mastic glue.

Unfortunately, over the years, one side of the the counter top pulled away from the wall as the house settled, and the mirror was subsequently supported on that side solely by the mastic glue.  So its heavy weight cause it to sink, little by little.

According to the repair men, after having removed the mirror, there was not enough mastic glue of to hold vertical weight of the mirror, and it was even below the building code regulation.

As a side note, our house is built by Pulte Holmes.  Pulte is supposed to be one of the better home builders, and for the most part our house seems to be well built, but as time goes on, with each repair that's needed, I'm discovering they find ways to cut corners just like everybody else.

Normally I try to repair things around the house myself, but this is one job I knew I didn't have the equipment, strength, or the knowledge to handle.  I didn't look at how much a replacement mirror would cost, but I doubt they are inexpensive, so I wanted someone else to blame if it broke while trying to fix it.  Plus I didn't want the 7 years of bad luck.

So I called around and finally found a place that would come out and give me an estimate.  They sent out two friendly guys that quoted me about $100 to get it secured back in a level position.  At first I thought it was a bit much, but after seeing what they had to do to get it off, I realized it was money well spent.

They used super strong pump-action suction devices to grasp the mirror and pull it away from the wall.  At first they thought they could just put one grasper on each side and raise the side that had sunk by lifting it.  Even after not being able to budge it with his feet on the floor, the guy on the sunken side got up and stood on the sink to try and get leverage.  Squatting down and using his legs to attempt to drive the sinking side upward, he looked like he was going to blow a hemorrhoid, as he strained and strained without budging the mirror.

Finally, after about 20 minutes of that nonsense, the decision was made to try and release the mirror from the backing mastic glue by moving the suction cup to various places on the mirror and pulling the mirror away from the mastic and wall behind it.

As preparation for the mirror completely releasing from the wall, they put a couple screws into the wall under the the bottom of the mirror on the side that hadn't sunk and the other guy put his suction on the bottom side that had sunk.  The fist guy moved his device to various places on the mirror and ended up having to pull with all his might to release each section. 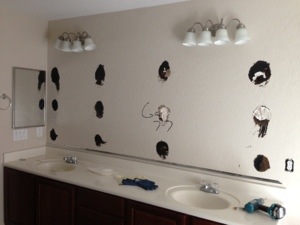 I watched in fear as the mirror bended and my reflection warped with each tug to look like I was looking into one of those fun-house mirrors at the carnival.

And I realized as he was doing so that I hadn't actually made it clear as to whether or not it would be at their expense if they broke the mirror with all this strain.  It crossed my mind that I would soon be in an argument that they were the professionals and that's why I called them, so they shouldn't have broken the mirror and would have to purchase me a replacement.  I probably would have lost that argument, but luckily they finally released the entire backside and removed the mirror without breaking it.

To securely level the mirror back into its correct position they, screwed the bottom mounting bracket into the studs behind the wall, doubled up on the mastic glue behind and put the mirror back up.  I had them raise the mirror about an inch above the counter back, so I could later fix the counter to get it back up against the wall, without having to worry about the mirror getting in the way.  I was afraid that inch might look goofy, but after it was all back up it looked just fine.
(The mirror is approximately 104x42 inches.)