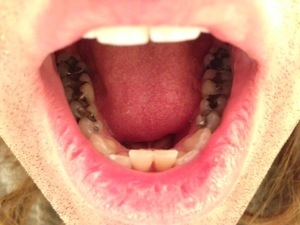 A couple months ago, it was time for my teeth to be cleaned, and a $30 Goupon for one passed by, so I grabbed it.

Before purchasing, I did a quick Google search for the dentist and checked out his website. The website looked fairly decent.

Of course I didn't think to read the reviews for the business on Google Maps, which, reading later, I realized may have given me an indication of what was to come.

So I bought two of the Groupons; one for me, and one for my wife (she was actually my girlfriend at the time). I made an appointment for myself the next day.

When I showed up, the reception area was quite nice, but that's about where it ended.

At first, I was in good spirits, as I was taken back to a dentist chair for my cleaning without much of a wait. But, as I crossed the threshold into the cleaning room, I started to feel a bit like I was about to star in the latest sequel to Quentin Tarantino's "Hostel".

The room was pretty dumpy, looking like it was pieced together from a 1970's gas station bathroom. If I was a more intuitive person, I would have left right then and there.

Unfortunately I'm the type of person that has to experience things before making a decision.

My X-Rays were taken first. They used the old film X-Rays, which are supposedly extremely high in radiation compared to today's digital technologies. I didn't know these old machines were still used!

Then I was laid back in the chair and a hose was strung across my legs. It was the water hose for one of the pieces of equipment. As the dental assistant plugged it in, a shot of mist came out of the connection as the pressure between the hose and the equipment equalized. The dental assistant seemed proud. ... Probably because neither of us got soaked. She had a look like "Sometimes its an aquatic 4th of July celebration in here" in her eyes as she released a sigh of relief.

Then the assistant started cleaning my teeth with an electronic scraper. She glossed over each of my teeth and finished up with the rotary pasty polish stuff. All done in about 10 minutes.

Then the dentist came in. He was a gruff Russian man, probably in his late 40's, who barely spoke English. He started my exam by berating the dental assistant, right in front of me, for something to do with where she put the X-Rays.

Then he started in on my mouth. By his demeanor and damnation of the dental assistant, I thought I was about to get a few of my teeth pulled just for sitting in the wrong position.

But instead, he poked about two teeth and was done. He pulled out my X-Rays and began explaining to me that all of my metal fillings were breaking down, and NEEDED to be replaced.

As a young kid, I was not forced to brush my teeth enough, even when I had braces. So just about all of my teeth have fillings, most of them still metal.

So in broken English I was told that I should consider all my metal fillings as "leaking through my teeth with cavities behind them". He pulled out a mirror and showed me one tooth in particular where you could see the shadow of the filling in the back from the outside of the tooth.

I was subsequently given a price quote for about $5k (just for the immediate work to be done) and asked when I'd like to get started.

Interestingly, I had been to a dentist about 6 months prior, and that dentist concluded, at that time, that all my fillings were fine. I was a bit worried by my new prognosis, but decided it best to get out as quickly as possible and head to my old dentist for a second opinion.

So I took my quote and shuffled out without making any further appointments, stating that I needed to think about what needed to be done.

I went home told my wife (she was actually still my girlfriend at the time) about my experience and told her that I didn't want her to go to this dentist and I would take the loss on the 2nd Groupon I purchased for her. That says a lot for the quality of the place, as I can tend to be an abundantly frugal person, to say the least.

A couple days later, I went to my previous dentist. He's made a bunch of money off of some crowns on me in the past, so I got him to give me the second opinion for free.

He took a bunch of digital X-Rays and concluded that my fillings were just fine. They were not breaking down and weren't causing any damage to their respective teeth. He gave me the spiel that I could replace them to the white composite fillings, but that would be solely for vanity reasons at this point.

However, a couple weeks ago, I realized that this wasn't me being inattentive, but instead having a bad experience, so I emailed Groupon support with my story and how I felt about the experience. They gave me a credit for my unused Groupon and added an extra $15 as an apology for my bad experience.

So what do I want you to learn from my experience?

I've had plenty of dentists try to get as much money out of me as possible. When I take my lustrous set of molars into a dentist office, I can usually see the reflection of a shiny new Porche down payment in the glistening of the dentists greedy eyes. ... but this guy might have been the worst.

I'd like to say that I learned to check the reviews for the business before buying, but in another post I'll talk about my honeymoon, where we did extensive research and still were greeted with a daunting experience.