Somewhere around a year ago, my wife and I were looking for entertainment via Netflix streaming on our Wii, and we ended up watching the documentary "Fat, Sick and Nearly Dead", which is about some Australian guy who's got too much money to sit around and do nothing, so he decides to health up by juicing and subsequently travel around the world telling everyone of the benefits to his success. He loses a lot of weight, solves all his physical problems, and wants to cure the rest of the world. ... That's probably not an extremely accurate synopsis, but that's the jist of how I remember it. 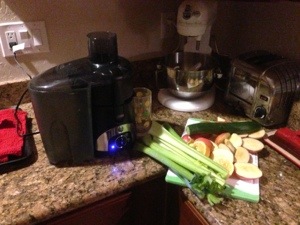 After being plagued by this year's horrific flu by not being able to rid herself of it for over a month, my wife recently decided she wants to health up and get more nutrients in her diet, so she can heal faster and feel more energized. So of course we recalled the juicer documentary and went out and purchased ourselves juicer.

Incidentally... I hope the juicing industry paid that guy who did the documentary well, as I'm sure he's been the source of a LOT of juicer sales.

Not wanting to go overboard, as there are what seems like more brands and models of juicers than possible combinations of juice, we decided to get an entry level juicer to see if we'd keep up our new juicy-lifestyle before investing in a more expensive, professional and efficient model.

After doing some rudimentary research on the subject, learning there are basically two types of juicers: Centrifugal and Masticating, we headed over to Walmart to get the relatively cheap GE 800W Centrifugal Juice Extractor that sells for about $50. Supposedly the masticating juicers are the more efficient choice, getting more juice per quantity of vegetable/fruit, but there don't seem to be any inexpensive ones (unless you get a manual one).

When we got home and started putting our GE 800 Watt Centrifugal juicer together, we were immediately frustrated during the set up as the pulp bin didn't seem to fit properly. When put in what seemed like the correct place, it was off by about an inch. We had to physically hold it in place during our first juice to eliminate the space so the the separated pulp wouldn't come flying out.

It was so far off, we thought maybe our juicer got the wrong part on the assembly line, and were going to drive all the way back to the store to return it for a replacement when, as a last resort, I decided to use two hands and try to really wrench it in place.

As I did so it snapped into a snugly fitting place, but of course I foolishly had my fingers at the edge, between the two pieces as I twisted them together, and painfully pinched one of them.

But after a few terrible and violent words towards GE and the pieces of plastic, subsequent tries got easier and easier to get the bin in place, and I always remembered to keep my fingers out of the way.

I haven't read any other stories on the internet about this issue, so maybe we just got one that was a little off.

As you'll likely be able to read in many of the reviews found on the internet, the juicer works pretty well, but it does have one really annoying design flaw: the spout from which the extracted juice exits the machine is short and you need just the right sized glass to catch the juice. A glass that's too big won't fit underneath, and one that's too small will allow the extracted juice to dribble down the side of the machine, wasting juice and making a mess when juicing.

Luckily we had glass that's just the perfect size, and its classy print even seems to fit perfectly with the experience.

This juicer really should come with a more versatile spout or a properly fitting container to catch the extracted juice. But then again, it was only $50, which is one of the least expensive juicers available, especially for the power level. And once you start buying vegetables and realizing how much you'll be spending on the food, you'll realize the $50 is relatively insignificant.

However, I just saw a video on YouTube which has a brilliant idea for fixing the spout flaw by purchasing an inexpensive piece of 1" plastic tubing from the hardware store to extend the spout.

The GE juicer has a roaring engine that seems to do a great job of extracting and separating liquid from pulp. The pulp is by no means completely dry, but its not as though you can take a clump of the pulp from the waste bin and squeeze any more juice out of it with your hands as I've read in some reviews about the machine; possibly a masticating juicer may be able to extract more juice out of it (an interesting experiment I'd like to try if I ever get one).

There are lots of recipes out on the internet for juicing and my favorite thus far is the combination of apples, carrots and ginger.

Clean up is fairly simple, you can easily disassemble the 5 major pieces and rinse them in the sink. However, you'll want to get a toothbrush to dedicate to cleaning the screen of the centrifugal pulper part (I have no idea what to call it) as that is the only part that really needs cleaning and doesn't readily rinse clean.

We are pretty pleased with this juicer for its price. However, its my understanding that a more expensive, masticating juicer, is the more efficient way get the most juice from your fruits and vegetables.

Thus, if we keep up with the juicing for a while, I'll probably look into investing in a masticating juicer as the amount of extra juice should eventually pay for the extra cost by reducing the amount of fruits and vegetables needed to be purchased for the same amount of juice.

If I do get one, I'll be sure to write a post on whether or not the extra price is worth the savings in vegetables. 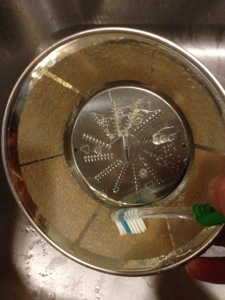