POSTED IN:
Our Dog, Reviews 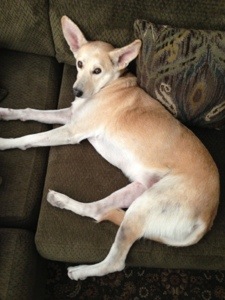 We rescued our dog Keena from the Lied Animal Shelter here in Las Vegas about 3 years ago. Though her paper work stated she was roughly 4 years old (i.e. fully grown), we quickly found out that wasn't correct as within a year, she doubled in weight from around 27lbs to 54lbs.

When we first picked her up, she had a full healthy coat, but since then has developed some skin allergies. She has dark spots, patches of hair loss, and she scratches herself a lot.

In the picture to the right you can see the skin issues on her hind legs.

We've tried and are trying just about everything we can think of and find to help her problem. We've had vets perform allergy tests, we've changed her food, tried shots and pills. Nothing seems to help.

We recently came a cross a product called DERMagic so we decided to give it a try. Specifically we purchased "DERMagic Lemongrass Spearmint Skin Rescue Shampoo Bar with Sulfur & Neem Oil". 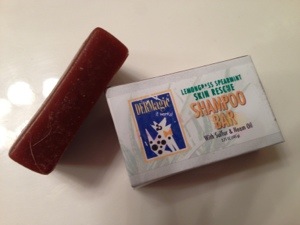 We used it for 4 baths and it didn't seem to help at all. Keena would itch just as much after a bath as she would before.

We decided not to use it any further because besides not helping, it does not have a pleasant smell and it would make Keena stink!

Its probably the sulfur in it that makes her smell so bad. According to this explanation and the DERMagic website the sulfur appears to be included to help as a topical skin cleanser that helps relieve itching and help the skin heal.

Maybe we didn't give the product a long enough trial, but in the times we used it, we didn't see any improvement.  She already tends to smell, so it wasn't worth continuing to make her smell worse than she already does, and not have her get any relief.