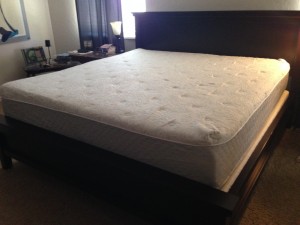 spring mattress recently hit the end of its practical lifespan.  My wife was no longer comfortable as it really sagged at our waist areas, and the amount of turbulence when one of us rolled over in the middle of the night would wake the other up.

Unfortunately, mattress warranties are pretty much worthless as our mattress does not pass any of the manufacture tests to be considered a warranty replacement as the criteria to replace a mattress is ridiculous (I need to write another blog article on that subject alone).

So we decided to get a new mattress. Not knowing exactly what type we wanted to get this time we sourced the question to Facebook and found the majority of our friends and family are sleeping on, and recommending, memory foam mattresses.

The recommendations ranged from family members that have been on a Tempurpedic for over 15 years to new low cost (not-quite-dense-enough-to-be memory) foam products with online-only sales models (CasperSleep.com & TuftAndNeedle.com).

In the middle of the spectrum was a suggestion to get a memory foam mattress from Costco.  The justification was that memory foam patents have run out, so a generic mattress will be just as good as the brand name Tempurpedic for about a third of the price.

Fearful that we would buy the mattress and not like it, I emailed Costco and asked about their return policy.  The return email I received from customer service said I could try the mattress and if I didn't like it, they would come and pick it up at no cost.  I would get a full refund.

When I asked about the length of time I have to try it out, the response was that they don't have a specific limit on when mattresses can be returned.  I've read stories on the internet of people returning their mattress to Costco even after having had it for a year, so I felt safe to assume, with my confirmation email on the subject from their customer service to back me up, they would easily let me return it after a few months if I was unhappy.

Thus, my wife and I decided to try out the "Novaform 14" Serafina Gel King Memory Foam Mattress" from Costco.com for $949.99 which also came with free shipping.

Well... to our surprise, the mattress showed up quickly, just two days later, at our doorstep.  However it was just left at our doorstep in a box.  ... A box that was amazingly small in size for a King Size bed! 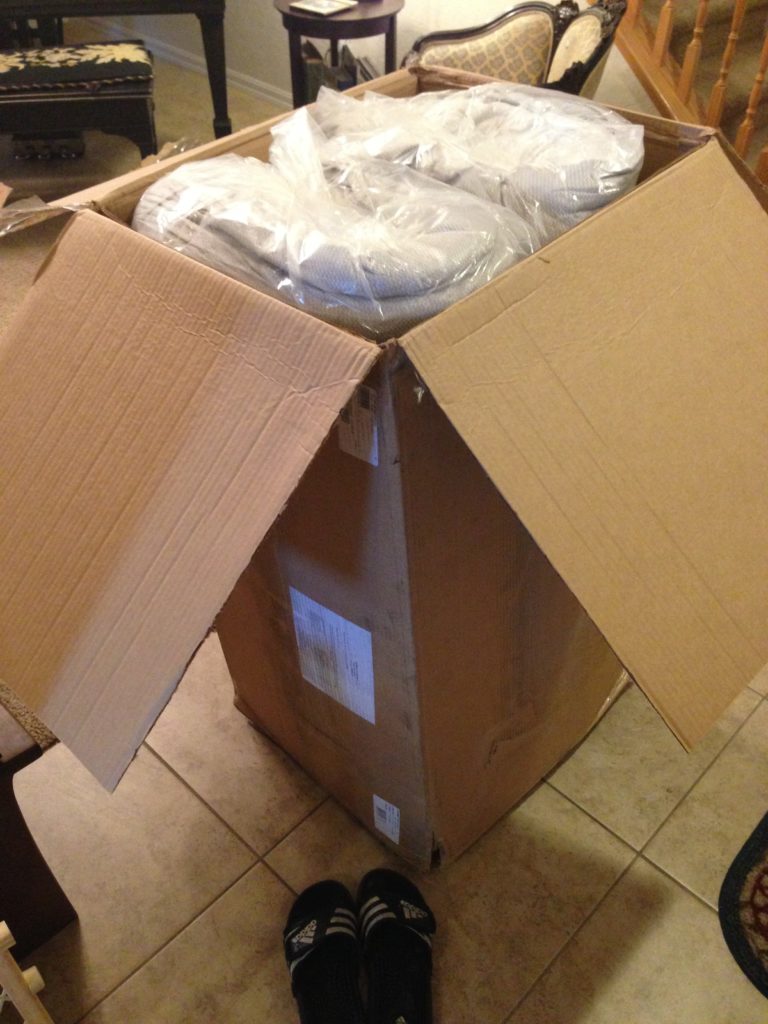 So there's one "gotcha" we were hit with right away.  We needed to get this 130 lb sack of densely packed foam into our house, up the stairs, and into our bedroom.

So, we dragged the mattress in the house and unpacked it from the box.

Then we lugged it up the stairs ourselves, which turned out to be a major mistake!  From the heavy lifting, I had a massive cramp later that night and the next day my wife threw her back out; 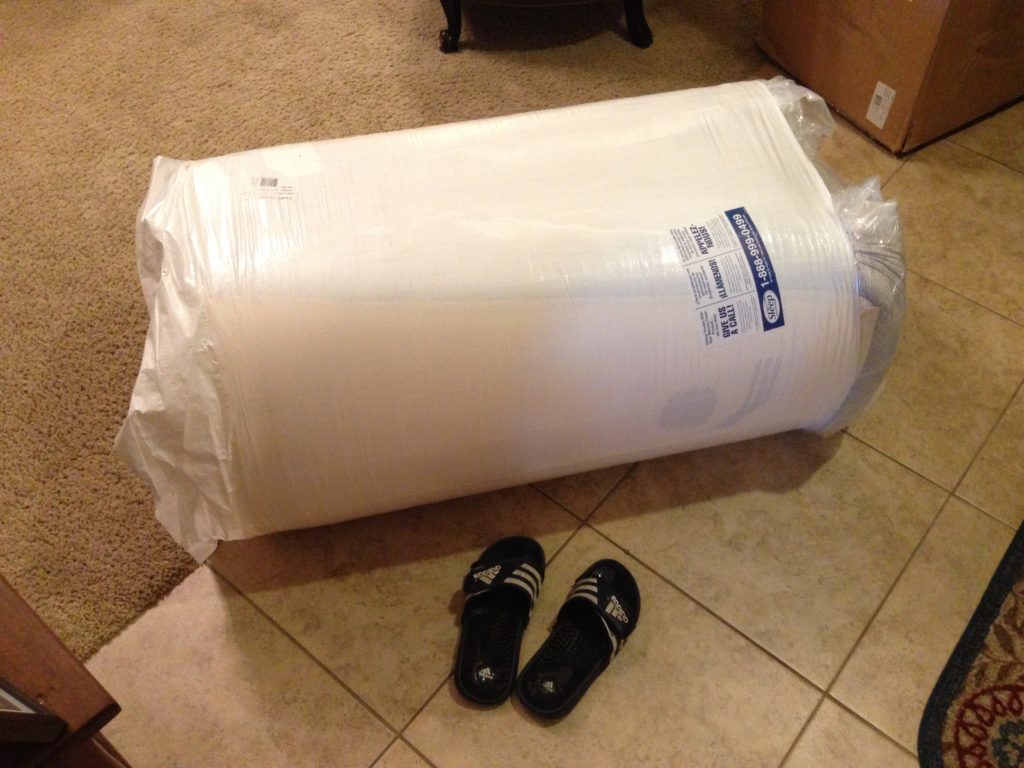 After removing the plastic wrapping, it was amazing to watch the mattress massively inflate and quadruple in size to a full king size. 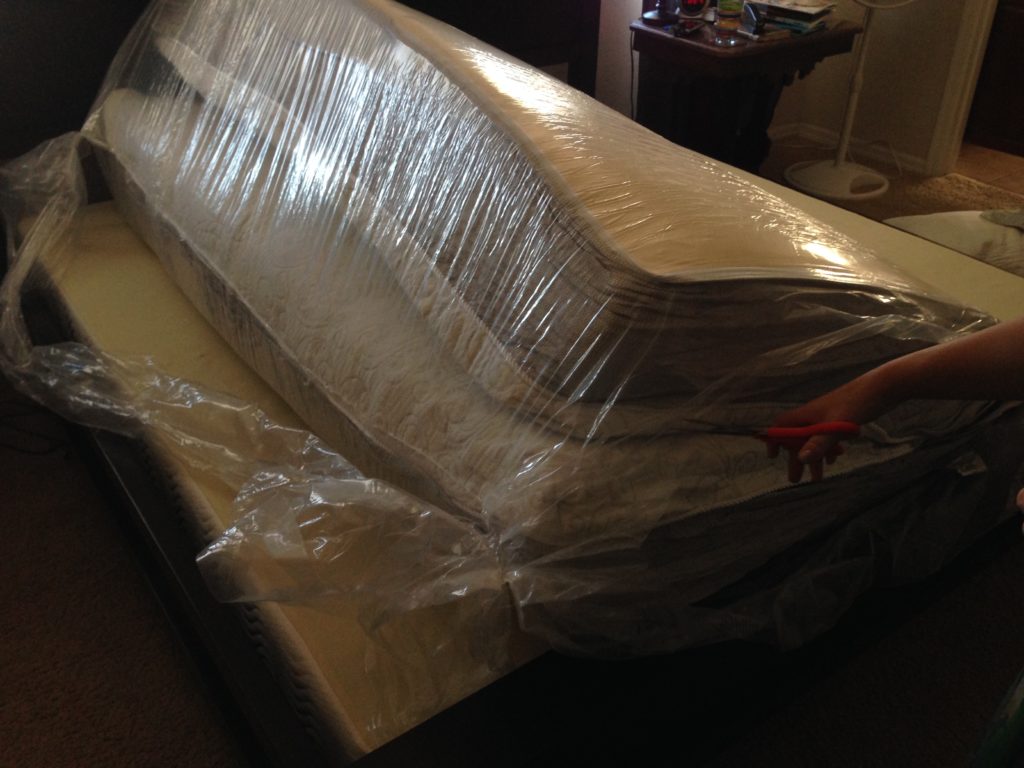 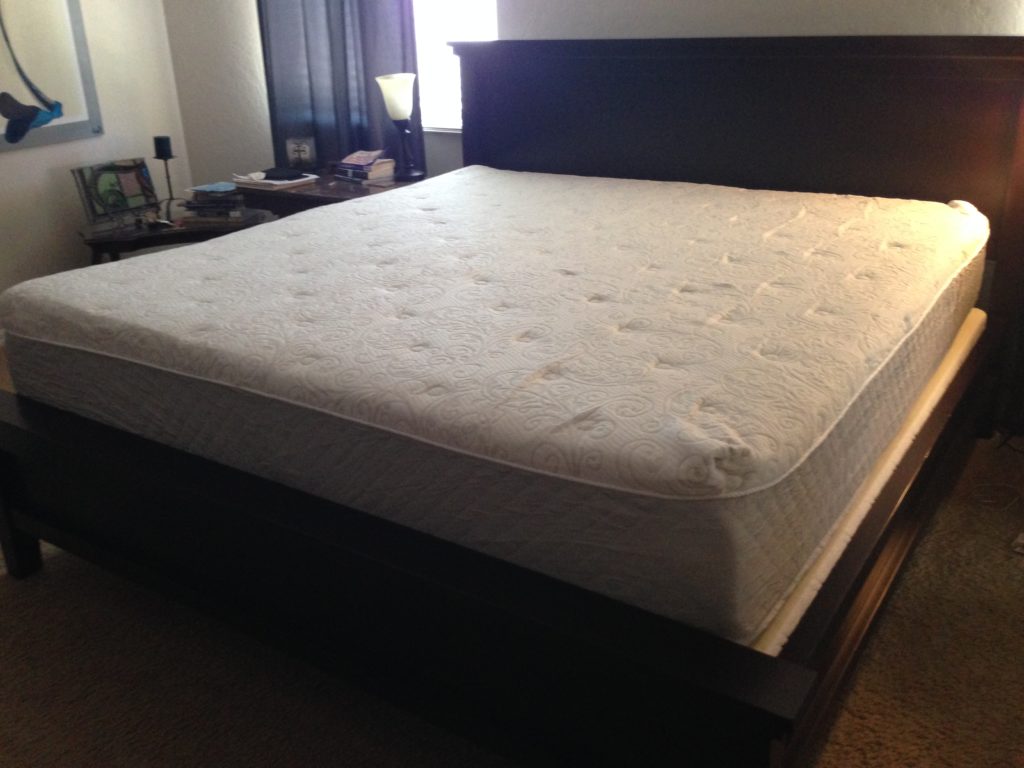 When reading the reviews for the mattress on the Costco website, I saw few complaints about the memory foam smell.  While there was a bit of an "off-gassing" smell, we didn't find it too offensive and it didn't last very long.

So... on to our first night of sleep!

The first night wasn't bad.  Both my wife and I felt the mattress was a bit hard, but we decided we wouldn't make up our minds as to how we liked the mattress until after we slept in in for at least a week.

I didn't make it.

Two nights later, within a few minutes of getting into bed and laying on my side, I was so upset with how much the stiffness of the mattress was hurting my ribs, that I quietly got up and went to sleep on the futon in the den.

My wife called out, "Where are you going?"

I yelled back, "I'm going to sleep on the futon, that mattress is punching me in the ribs!"

Rather than return the mattress, we decided to up the ante and get a mattress topper from Costco to help soften it up.  The idea being, if the topper didn't help things, we would return both.

The topper also came in a surprisingly small box and inflated massively when unpacked. We had some issues with the unpacking process as the protective casing stuck to the foam as it unraveled and would rip the edges of the memory foam as we tried to peel it off. 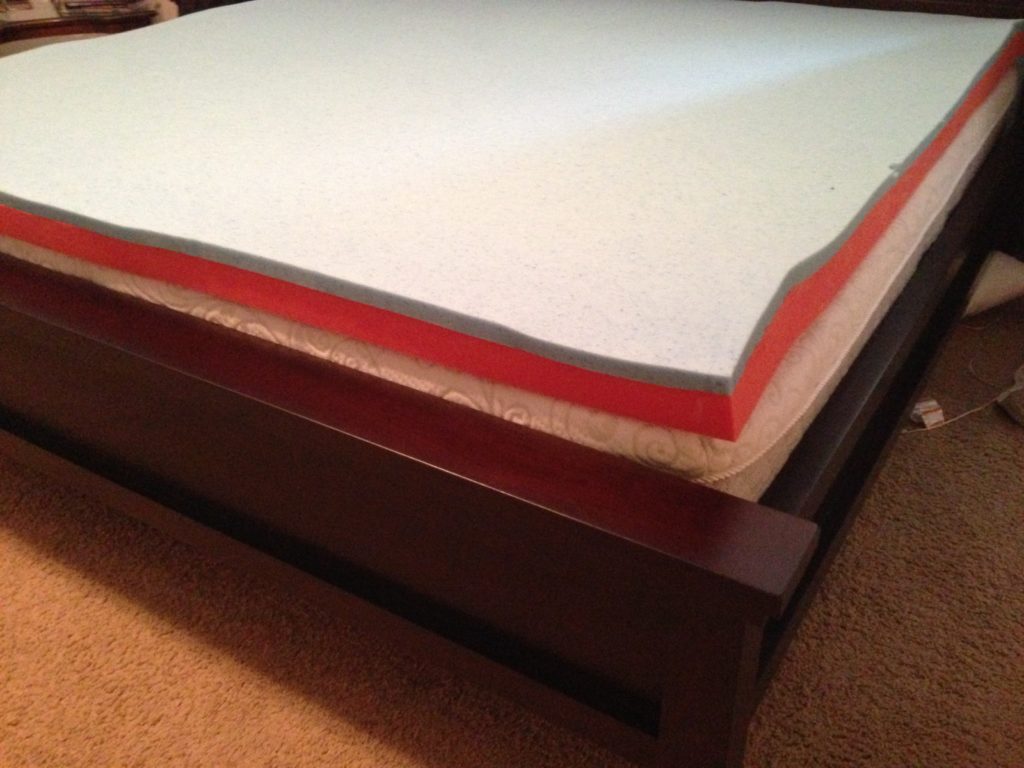 It turned out not to be that big of a deal, as once you put the foam in the protective cover which comes with it, there's not noticing of the little rips at the edges. 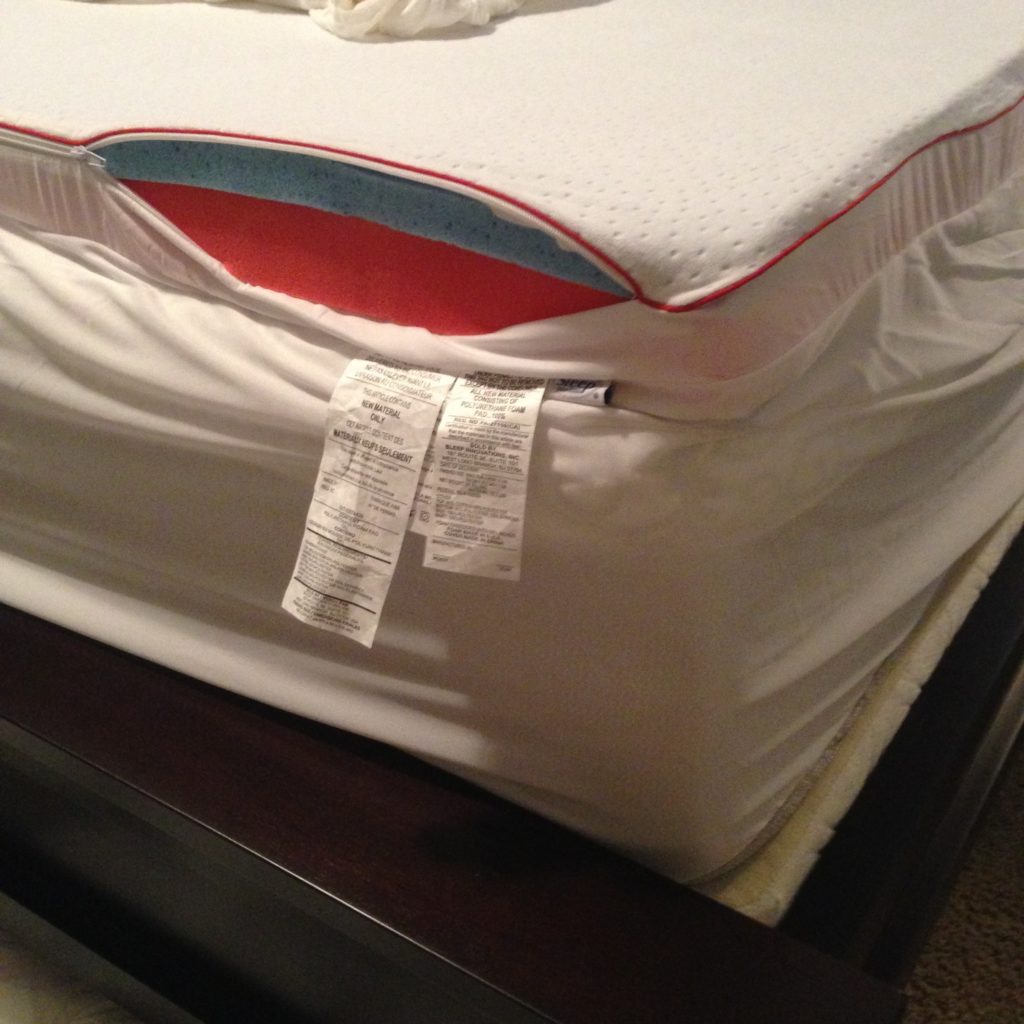 So finally my wife and I slept a few nights on this configuration and we loved it!

We've been sleeping comfortably on it ever since.

There's a couple caveats, however.

The motion separation is not very good.   I can still feel a fair amount of motion when she moves or rolls over and she feels it as well when I move around.  So we still wake each-other up sometimes in the night if one of us is moving around a bit and unable to fall asleep.

I thought it was the bed frame that was the issue, but we took the mattress off the bed-frame and put it on the floor and still had the issue.  It also didn't matter if the topper was on or not.

The second caveat is that because the mattress is 14" and the topper another 3", the bed is a total of 17" and our sheets, though deep pocket ones, do not fit over the whole thing.  So we put a sheet over the topper and another over the bottom mattress.

I'm sure, even at this point we could return both the topper and the mattress, but it would be such a pain to do this all over again that we decided we are happy enough with the final result.

The kicker that really caused us to keep the mattress was when I went to find the link for the mattress (3 months after purchasing) on Costco.com for this article, I found that the mattress was on sale for $150 less.  I called Costco and hinted that I was thinking about returning the mattress based on the email I was sent that there was no time limit, and right after the representative responded I could return the mattress, I mentioned that it was on sale and I would keep the mattress if they gave me the savings.  She put me on hold, came back and said that even though it was past some 30 day financial window, they would refund me the discount amount of $150.   Obviously, she got the hint that I would just return the mattress and then buy it again for the cheaper price, and she saved us both the hassle.

If I was to do it all over again, I would have bought a thinner base mattress, something more towards 11" along with the 3" topper to get the normal 14" deepness that a standard deep pocket sheet will fit, as I don't think the base mattress really makes a difference.  I would also try to get a base mattress that is split to help eliminate the transfer of motion from one side to the other. In fact, I'm not far off from taking a razor blade to the bottom mattress and splitting it in half.  But shhhhhhh... don't tell my wife.

If you are in the market for a memory foam bed, check out NirvanaBed.com.  They have a 121 night sleep guarantee with 100% no-questions asked refund policy.  Also... they donate a bed for every purchase (in the charitable program) to my wife's local Foster Kinship, that helps kids in Las Vegas (Clark County), Nevada.