Are "Groupon Goods" deals really as good as they seem?! 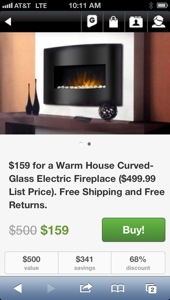 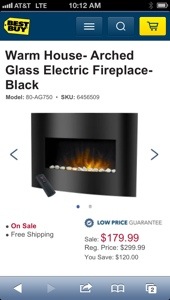 I get Groupon Goods emails all the time for products that look like a they are great deal if you solely look at the pricing that Groupon gives on the promotion page.

But often times I do a quick Google search and find out that not only is it possible to get a similar deal on another site, but Groupon often embellishes on the retail price.

My wife and I were recently talking about how we'd like to redo our bedroom, and thought it would be romantic to have a fireplace.  We both knew it was a bit of a financial fantasy to have a real one installed, but I started looking into alternatives, like virtual electric ones to see what I could find.

It seems that Groupon was tuned into our aesthetic cranial wave patterns as a couple days later, a Groupon Goods offer popped up for one.

(As a side note: Can advertisers purchase information about us that hasn't left our brains yet?  Or do they still have to do it the old fashioned way and buy it from Social Media sites like Facebook?)

I was initially excited for the amazing deal they presented and thought I needed to jump on it immediately to lock in the unbelievable price.  But after doing some checking, I discovered that not only did the product get pretty poor reviews throughout the internet, but it wasn't really THAT amazing of a deal.

In the screen shots above from my iPhone, you'll see that Best Buy had the same "Warm House Glass Electric Fireplace" as Groupon was offering, but Best Buy listed the retail price as much lower than Groupon's promotion showed it.

$500 vs $300 is a pretty embellished retail price to make the lowered price seem quite "amazing".

To Groupon's credit, the price is $20 less and it comes with free shipping.  So it is a good deal, but it's not the unbelievably low deal they make it out to be.

I see this situation often when I look into Groupons offers.

One comment on “Are "Groupon Goods" deals really as good as they seem?!”